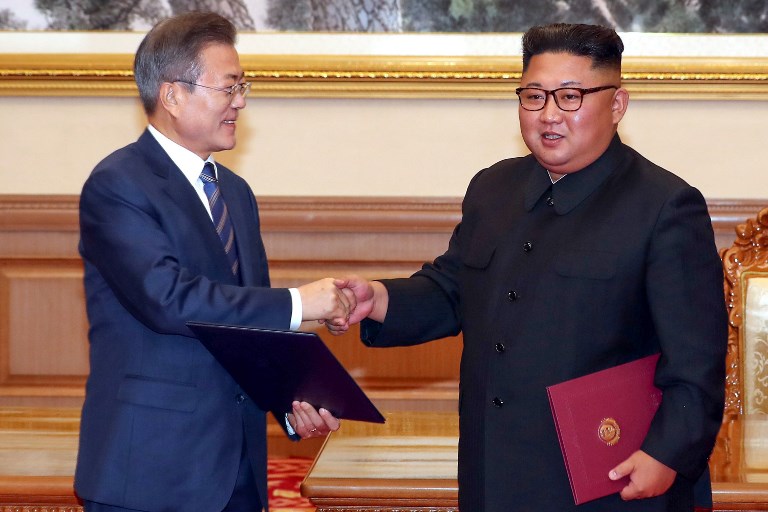 North Korea’s Kim Jong Un will soon make a historic visit to Seoul, he said Wednesday, and has agreed to close a missile testing site in front of international inspectors, as a rare inter-Korean summit unfolded in Pyongyang.

However, progress on the key issue of dismantling the North’s nuclear arsenal was limited, even though the South’s President Moon Jae-in had hoped to bring fresh momentum to stalled talks between his hosts and the United States.

Kim said he would travel to Seoul “in the near future”, adding that the agreement he signed with Moon “carries the people’s fresh hope and the people’s strong, flaming desire for reunification”.

The visit would be the first by a Northern leader to Seoul since the end of the 1950-53 Korean War, when hostilities ceased with an armistice rather than a peace treaty, leaving the divided peninsula technically in a state of war.

Talks in Pyongyang built on a growing rapprochement, with the two leaders agreeing Wednesday to hold family reunions on a regular basis, work towards joining up road and rail links, and mount a combined bid for the 2032 Olympics.

Moon said Kim’s visit to Seoul could happen this year and would be a “turning point in South-North relations”.

The North had agreed to “permanently close” a missile engine testing site and launch facility in Tongchang-ri “in the presence of experts from relevant nations”, he added.

At Kim’s historic summit with US President Donald Trump in Singapore in June — brokered by Moon — he declared his backing for denuclearisation of the peninsula.

But no details were agreed and Washington and Pyongyang have since sparred over what that means and how it will be achieved.

But experts were sceptical.

The North — whose ballistic missile programme is banned under UN Security Council resolutions — has carried out several long-range rocket launches from the site, also known as Sohae, but has also used many other locations, including Pyongyang airport.

“Kim is playing this brilliantly: verify that I dismantle a single site that I no longer need anyway while I mass produce the missiles the site helped me develop,” said Vipin Narang of MIT.

Arms control expert Jeffrey Lewis said the consensus view was that the uranium enrichment facility at Yongbyon “was built for (the) express purpose of being sacrificed”.

After the high symbolism of Moon and Kim’s first meeting in April in the Demilitarized Zone, and the Singapore summit, progress has largely stalled.

Washington is pressing for the North’s “final, fully verified denuclearisation”, while Pyongyang wants a formal declaration that the 1950-53 Korean War is over and has condemned “gangster-like” demands for it to give up its weapons unilaterally.

Ahead of the Pyongyang summit there had been speculation Moon could secure a promise from Kim of a list of the North’s nuclear assets, but no such document was mentioned.

“Had the North promised to hand over information on its nuclear arsenal, for example, it would have looked much more encouraging.”

But the two Koreas have been pressing ahead with their own rapprochement, with Kim looking to secure economic cooperation from the far wealthier South, and Moon looking to reduce the risk of a US-North Korean conflict that would devastate his country.

The Rodong Sinmun newspaper, the mouthpiece of the North’s ruling party, has given the summit blanket coverage, with dozens of photos of the two leaders embracing on Moon’s arrival Tuesday, parading together through the streets of the capital, enjoying a concert, and toasting at a banquet.

On Wednesday evening, Moon’s party will dine at a new fish restaurant in Pyongyang opposite Mansu hill, where giant statues of Kim’s predecessors — his grandfather Kim Il Sung and father Kim Jong Il — look out over the city.

It was chosen after Moon expressed interest in dining at a local restaurant with ordinary citizens. However, a retail shop there sells North Korean caviar at $50 for a 50-gramme jar — a luxury far beyond the reach of most North Koreans.

Afterwards, Moon will attend a performance of the “Mass Games” — North Korea’s spectacular propaganda display featuring tens of thousands of performers against an ever-changing backdrop, made up of 17,490 children turning the coloured pages of books in sequence to send images rippling across one side of the May Day stadium.

The premiere of the latest version of the show, called “The Glorious Country”, earlier this month featured video footage of Moon and Kim together at their first summit in Panmunjom — prompting the unusual sight of tens of thousands of North Koreans applauding images of the South’s president.

Jan 19, 2020Emily RandESPN China's League of Legends Pro League is a special place. When I first watched it,...

Millions of lives will be improved by 10-year plan, says Money and Pensions service The government is promising to turn...

We're more than halfway through the 2019-20 season, and the Milwaukee Bucks remain locked in our No. 1 spot...